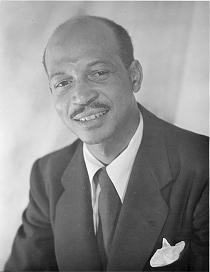 I conducted my thesis research back in 2004-05 when it was not quite as easy as it is now to google people and find obscure news articles about them. All I knew about Rucker then was what I had read in his files at the archive. Perhaps other researchers know more or could find out more about him now. Certainly I cannot really vouch, at this belated date, for whatever research methods 22-year-old me was using, so maybe I missed part of the story. Nevertheless, in case his words are of any interest today, I thought I would reproduce the following paragraphs from my senior thesis in which he appeared:

During World War II the slogan of “ Double-V”—victory against fascism abroad and racism at home—became a popular expression of African-American hopes about the war’s outcome. [3] This widespread opposition to fascism, however, was not a direct descendant of 1930s antifascism. The notion of a double victory, implying a double war, is telling in this respect: in contrast, the Communist antifascism of the 1930s had constructed the struggles against European fascism and racism as part of a single struggle against “fascism,” broadly defined to include all instances of imperialist, capitalist, reactionary injustice.

However, what both the left-wing African-American antifascists of the 1930s and the mainstream African-American antifascists of the 1940s shared was a frustration with the perceived hypocrisy of the United States, fighting evils abroad while tolerating similar evils at home. The wartime letters of James Bernard Rucker illustrate the tensions between antifascism, nationalism, and racial identity. Rucker was one of the African-Americans who fought with the Abraham Lincoln Brigade in Spain, and one of the many who went on to enlist in the United States Army during World War II. He always saw the struggle for African-American freedom as inextricable from the fight against fascism. As he wrote to his wife in July 1943: “The fight for the end of Jim Crow, for Negro equality is as vital, as important, as primary to the interests of democracy as is the freedom of the Polish, French, Belgian or any other European peoples. It is one fight all over the world for the national liberation of all peoples and not just an ‘incidental’ fact that Negroes will attain freedom too.” [4]

A white American who drove ambulances in Spain with “Bunny,” as he was known, recalled years later that even then, “One always felt his bitterness toward the oppression of blacks in American society. He told us that we were all prejudiced against black people, even though we wouldn’t admit it.” [5] During World War II his general bitterness had been compounded by specific frustration …. In March 1943, Rucker, who had made application for officer training at his supervisors’ encouragement, was instead transferred to a non-combat unit stationed at Fort Bragg, North Carolina, doing maintenance and beautification work. No doubt Rucker’s race played a part in limiting his career in a still-segregated army, but his history of Communist activity, including his participation in Spain, were also likely strikes against him. [6]

From Fort Bragg Rucker wrote long and detailed letters to his wife, covering the jauntily-illustrated army-issue stationery in ink with his careful hand. He described his new duties: “I’m in charge of a truck and a crew that collects trash and garbage from the officers and Non-Com’s residential section. The mules are hell. That detail salvages tin cans, wire and scrap iron which they collect. Other trucks haul ashes. […] Another detail mows lawns. And another is for Post beautification, planting and trimming shrubbery. I’ve been on all of them except the furnace firing and the mule wagons.” [7]

This was not what Rucker had had in mind when he enlisted. He had wanted to fight fascism in Germany and Japan, the way that he had in Spain. In fact, by 1944 he had been transferred to an infantry unit and fought in Italy, where he earned three bronze stars and a purple heart. [8] But in 1943 he was still collecting trash and planting flowers. “I took personal pride in that I acted on the basis of my hatred against Hitlerism at all times and I had personal hopes that I’d be given by my own country even a limited opportunity to express that hatred through some measure of participation in our armed forces,” he confided to Helen. “This has been effectively denied me […] I’m going to try very hard in the next few days to see everything in its true perspective, but I am going to fight somehow, if only against the limitations which prevent my entering fully into the fight against the main enemy. Although that will consume a lot of energy which could be put to better use.” [9]

[8] Biographical information on Rucker from the Tamiment Library’s “Guide to the Papers of James Bernard Rucker, 1941-1959.”